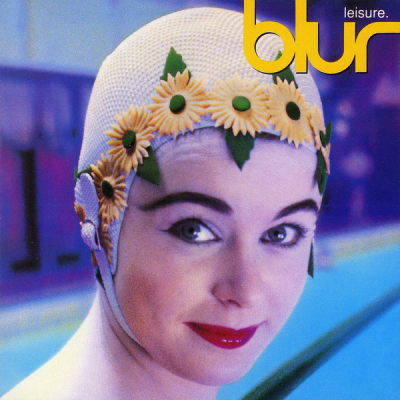 Highlights: She’s So High, Bang, Sing, There’s No Other Way

There are bands that put out debut records that indicate they seem know where they want to head to but clearly display they are still ways away from getting to the place they have their eyes on. Meanwhile, there are groups that produce first works that are so fully formed and confident that a listener unaware of the artist’s rookie status would think the album was put together by wise veterans. And then there is the case of introductions such as the one created by the Britpop giants of Blur. “Leisure” is a major oddity; an initial step that stands so distant from everything that would come later that it could, save for Damon Albarn’s recognizable voice, easily be blindly labeled as an effort made by a group of English blokes somewhere between 1989 and 1992.

Its placement within that four-year interval and inside the geographic boundaries of Great Britain would not be without reason, and that is because “Leisure” reeks of the era in which it was made: a time when British rock, though still producing a solid number of remarkable works, was stuck in the patterns established by the shoegazing of My Bloody Valentine and the Madchester of The Stone Roses. Inside that spectrum, “Leisure”, despite its balance between noise and pop, is far more in line with the latter than with the former, as it is more concerned with sugary hooks than sonic assaults. Its problem, however, is that such an alignment might be too close for comfort.

One can, of course, find distinctions between what Blur does in “Leisure” and what The Stone Roses did in their self-titled masterpiece. Although both records have reverberant and colorful underwater soundscapes, the guitar approach of Graham Coxon greatly differs from that of John Squire, because where the second was an orchestrator that followed on the footsteps of The Smiths’ Johnny Marr, the first emerges as a noisy pounder whose dirty and mighty distortions become cleverly hidden by the pop flavors Albarn likes to throw into the compositions.

And for those very same reasons, “Leisure” could – in a way – be linked to the rest of Blur’s output, as during its fifty minutes Albarn reveals his nose for catchy melodies; Coxon engages in some fearless racket; and the duo of Alex James and Dave Rowntree join those diverging spirits via some firm yet lively playing. Two key ingredients, though, are missing in “Leisure”: creativity and personality. It does not quite do enough to carve out a shape of its own, and Albarn’s lyrics, which would by 1993 develop a social sharp eye akin to that of The Kinks’ Ray Davies, are frequently dull and feel unfinished, even if the words to “Bang” do show glimpses of what would come later.

In fact, it is a comparison to the band’s inaugural Britpop effort, “Modern Life Is Rubbish”, that reveals where “Leisure” falters the most. Because in that album, Blur was able to mix old-school English musical traditions with absolutely contemporary sounds in order to forge music that was as quaint as it was current. Here, contrarily, listeners will surely get the contemporary; that is, the pop of The Stone Roses with tinges of the noise of My Bloody Valentine.

What they will miss, though, is the classic dosage that lifted Blur to stardom and allowed the group to find their own acre of land in the widely varied Britpop scene. Amidst the criticism it deserves, there are bright points to be seen in “Leisure”. The three singles extracted out of it are genuinely great. Following a clearly defined formula, they stand out thanks to impossibly catchy melodies and stellar guitar playing. “She’s So High” is backed by a gigantic guitar wall whose riff pounds as well as it cuts; meanwhile, “Bang” and “There’s No Other Way” have all the playful bounciness of Madchester. However, given the recipe that is used in the creation of those standout moments is repeated over and over again during the course of the album, many of the other tracks end up merging into one another due to a mixture of excessive similarity and utter lack of remarkable traits. And although many of the tunes that use that mold cannot truly be labeled as bad, except for “Slow Down” and “Repetition”, they can be accused of being generic.

To be fair, “Leisure” does – in two of its twelve songs – step out of the confines of its basic framework. Those instances are “Sing” and “Birthday”, and in them the band plays around with constructing ominous and noisy atmospheres that broadcast feelings of suffocating depression and endless lethargy. Though equally interesting in purpose and experimentation, their results could not be more different, for while “Birthday” manages to both be lyrically lousy and feel long despite lasting for under four minutes; “Sing”, with its drone piano, steady drums, and ear-piercing effects, is nothing short of a master work, one that is – in an album filled with safe choices – so strange in its inventiveness that it would be used as the basis for one of the best songs, “1992”, of the group’s most wildly experimental album, “13”.

Its greatness, however, cannot save “Leisure” from being – at most – harmlessly average. Its four best tracks are certainly a mandatory listen for anyone who is even just remotely interested in the fantastic trajectory of one of England’s greatest rock bands; the rest of its tunes, and the record itself, though, are only worthy of the time of Blur fans or dedicated music aficionados, because not much about it hints of what was to come with the arrival of 1993 and the beginning of Britpop, making the leap between “Leisure” and “Modern Life Is Rubbish” stand as one of the best and most impressive transformations in rock history.